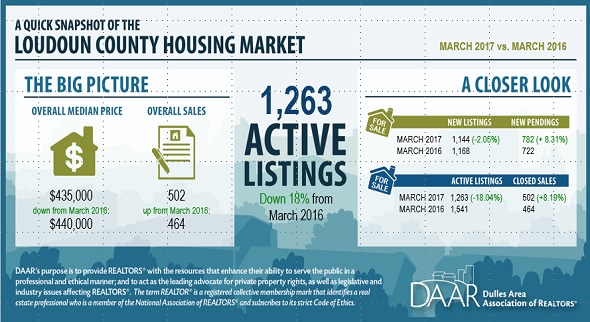 The following analysis of the Loudoun County, Virginia housing market has been prepared by George Mason University’s Center for Regional Analysis. It was prepared for the Dulles Area Association of REALTORS® by analyzing MRIS multiple listing data from MarketStats by ShowingTime.

Overview
• Active inventory continues to decline and at the end of March was 18 percent lower than the same point last year. This left 1,263 homes for sale at the end of the month, with 2.3 months of supply headed into April.
• Demand is rising as closed sales are up 42.6 percent from last month, and 8.8 percent over March 2016. This is the largest number of March sales since 2006. New contract activity reached its highest March total since 2006 at 782 new pending sales.
• New listing activity decreased relative to last year; 1,144 homes were added to the market in March, down 2 percent from March 2016.  This signals no reprieve from the current tight inventory in the coming months.
• Loudoun County homes continue to sell significantly faster than last year, with half of the March sales being listed for 8 days or less, down 71 percent from March 2016’s total of 28. This is the lowest median number of days on market in over a decade.
• Loudoun County’s median sales price decreased slightly in March, declining 1.1 percent on an annualized basis to $435,000.
• Loudoun County home sellers received on average 98.2 percent of original list price in March.
• Condos saw the highest number of new listings, and new pending sales in over a decade.

Click here for a copy of the full report