The Development Plan Goes to the Board

DAAR believes that the Plan should serve as a guide to help meet the market’s demand for commercial and residential opportunities. The plan should: 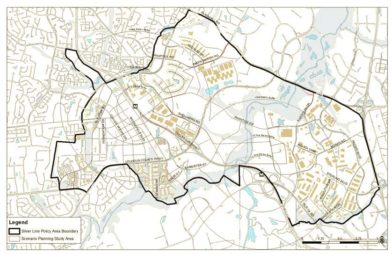 As drafted, the Plan will guide development of the 4,275 acres around the Loudoun Gateway Station (Route 606) and the Ashburn Station (Route 772). Both stations are scheduled to be completed by 2020. The vision of the Plan is to create a complete community that accommodates living, working, shopping, learning, and playing in the areas close to the Metrorail. As such, the policies developed in the Plan will impact the development of housing, employment, retail, schools, community facilities, and a multi-modal transportation network in the surrounding Metrorail areas. 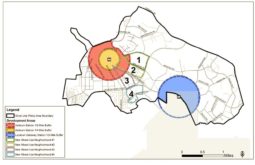 The yellow areas within ¼-mile of the Ashburn station are planned to have high-density, mixed-use, transit-oriented development. The pink areas between ¼-mile and ½-mile of the Ashburn Station will have walkable, urban-style development. This area is expected to have higher amounts of residential development. The blue areas within approximately ½-mile of the Loudoun Gateway Station will include offices, high density employment uses, retail, educational institutions and civic buildings. The four new mixed-use neighborhoods between the two stations (labeled 1-4) will also be urban in style and provide walkable access to housing, retail, and office uses.

As drafted, the Plan does not allow for any new single-family detached housing neighborhoods or any new housing close to the Loudoun Gateway Station. Rather, it emphasizes development of multi-family and single-family attached housing (townhomes) closer to the Ashburn Station. Housing nearest the Ashburn Station will include apartment buildings, urban townhomes, age-restricted housing, condominiums, live-work lofts, and two-over-two units. Limited retail could be developed on the first floor of residential buildings. A minimum of 10% of land area should be dedicated to parks, plazas, and outdoor gathering spaces. Elementary schools and other community facilities could also be built in this area.

Areas further from the Ashburn Station would include various housing styles with the addition of grocery stores, banks, doctor offices, multi-tenant or corporate office buildings, restaurants, and other retail businesses. Schools sites will also be provided, depending on the neighborhood and projected student populations.

The Plan projects that by the year 2040, a total of 15,123 units of housing could be available in the area around the Metrorail station, more than double the number of housing units under the current Revised Plan. Already, County has received proposals to develop housing totaling 6,623 units. 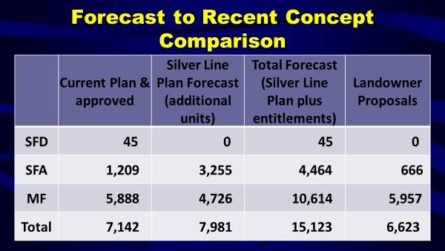 The area near the Loudoun Gateway Station will have walkable employment centers, shopping and entertainment options, and could include community facilities. Because of its proximity to the Airport, one or more regional destinations or “anchor” uses could include sports stadiums, convention centers, exhibit halls, museums, or shopping malls.

One area of concern during review of the Plan is the compatibility of development with operations at Dulles Airport. Last year, the Board of Supervisors decided to eliminate any new residential development in the area east of Loudoun Gateway Station. Therefore, the Plan was created with residential development near the Ashburn Station rather than near the Loudoun Gateway Station. At the April 13th Planning Commission meeting, Commissioners voted to request that residential units be permitted in area east of Loudoun County Parkway, and re-designated it as a mixed-use area. 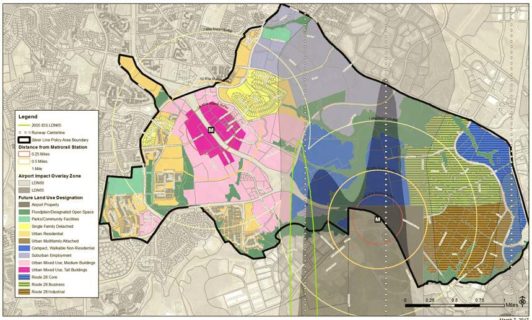 DAAR understands that the limitation of housing near the Loudoun Gateway Station is based in part on a twenty-year old Airport noise study, the 1995 noise contour lines, and a 2005 Environmental Impact Statement. During the past 10 to 20 years, there have been changes in aircraft noise, airline operations, and Dulles Airport operations which may alter the noise contour lines. Given the potential of attracting a development approach that will help maximize tax revenue around that station, on October 12, 2016, DAAR recommended that a new noise study be commissioned. DAAR is pleased that at the April 13th meeting, the Planning Commission voted to request an analysis of the Dulles Airport noise contours. If the contours are modified significantly, Commissioners recommend that the Board of Supervisors initiate a Comprehensive Plan Amendment for those modified properties.

The Plan also envisions a new transportation network focused on providing a variety of options for residents, workers, and visitors to the Metrorail areas. Choices include walking, bicycling, riding a bus, and driving. This multi-modal approach includes: 1) creation of a sidewalk system that provides continuous routes along both sides of every street; 2) development of on-street bicycle lanes and a comprehensive on- and off-road trail network; 3) identifying and building streets that feature elements to support premium transit services to provide logical connections throughout the County and to the rest of the region via Metrorail; and 4) developing a system of higher-capacity roadways in order to move traffic through and into the area.

Status of the Silver Line Plan

Loudoun County’s Planning Commission began working on the Plan in December 2016. On April 13, 2017, Commissioners approved an amended Plan for submission to the Board of Supervisors.

It is clear that housing will be permitted around the future Silver Line metro stations. What is unclear is whether housing will be permitted near the Loudoun Gateway Station and how much of the housing will be affordable for the workforce to support retail and commercial employment centers. DAAR welcomes the inclusion in the Plan of a viable multi-modal transportation network to link communities within and outside of the metro development areas.

The Board of Supervisors (the Board) will begin reviewing the Plan in May. Once it is endorsed by the Board, the Plan will need to be reviewed by the Virginia Department of Transportation (VDOT). Once reviewed by VDOT, the Plan will return to the Board for final adoption. This process, if proceeding without delay or interruption, should be completed in early Fall 2017. Click here for more information about the Plan.