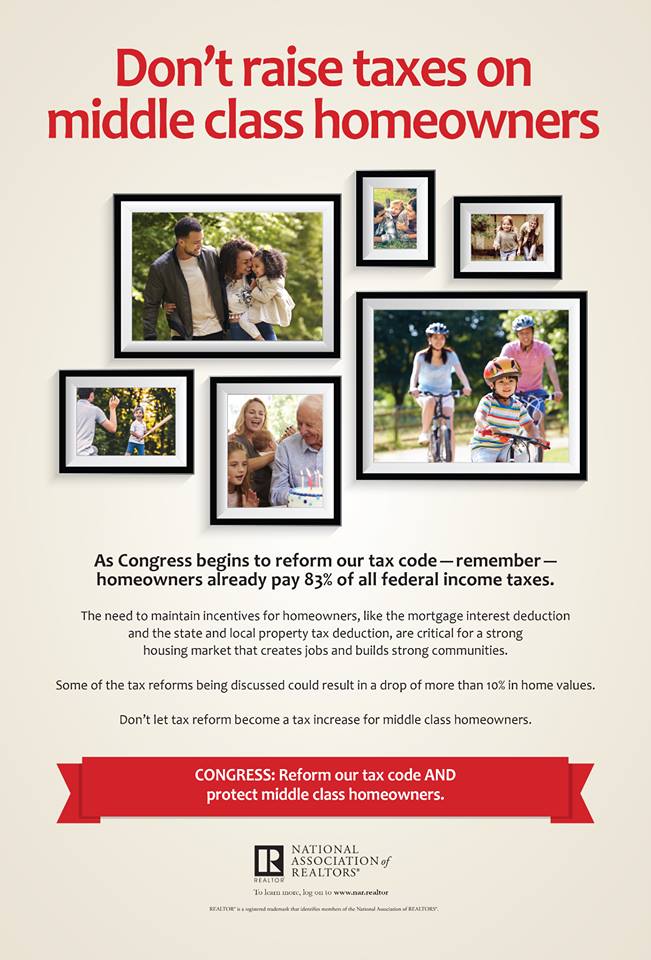 A group of legislators and administration leaders known as the “Big 6” released last week an outline for comprehensive tax reform that if enacted, according to the National Association of Realtors®, could lead to a tax on homeownership for millions.

According to the Big 6’s framework for tax reform, changes to the current tax code would eliminate important provisions, such as the state and local tax deduction, while nearly doubling the standard deduction and eliminating personal and dependency exemptions. NAR believes the result would all but nullify the incentive to purchase a home for most, amounting to a de facto tax increase on homeowners, putting home values across the country at risk and ensuring that only the top 5 percent of Americans have the opportunity to benefit from the mortgage interest deduction.

NAR President William E. Brown, a second-generation Realtor® from Alamo, California and founder of Investment Properties said that the proposal reaffirms Realtors®’ concerns from earlier in the year and urged lawmakers to keep homeowners in mind as they proceed with comprehensive tax reform with the following statement:

“We have always said that tax reform – a worthy endeavor – should first do no harm to homeowners. The tax framework released by the Big 6 today missed that goal.

“This proposal recommends a backdoor elimination of the mortgage interest deduction for all but the top 5 percent who would still itemize their deductions.

“When combined with the elimination of the state and local tax deduction, these efforts represent a tax increase on millions of middle-class homeowners. That tax increase flies in the face of a reform effort ostensibly aimed at lowering the tax burden for Americans. At the same time, the lost incentive to purchase a home could cause home values to fall.

“Plummeting home values are a poor housewarming gift for recent homebuyers and a tremendous blow to older Americans who depend on their home to provide a nest egg for retirement.

“Congress can still score a win for American families by promoting lower rates and comprehensive reform that doesn’t single out homeowners for a tax hike, while also preserving important investment incentives like 1031 like-kind exchanges. We look forward to continuing the discussion in the weeks and months ahead.”