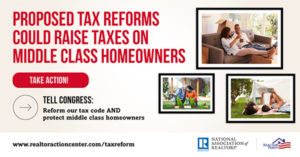 NAR is a strong supporter of tax reform but the framework that the Republican leadership and the Administration have put forward is not the reform that works for middle-income homeowners, even though at first glance it seems like it would be, since it calls for a near doubling of the standard deduction. But what often gets lost in the debate is that it also calls for the elimination of the personal exemption and the exemptions for dependents. Depending on family size, whatever gains a household gets from the higher standard deduction would be wiped out by the loss of the exemptions. Meanwhile, it calls for eliminating most itemized deductions, including the deductions for state and local taxes, which means many households that now itemize would feel they were better off taking the standard deduction. As a result, they would in many cases end up paying more taxes. On the plus side, the framework leaves the mortgage interest deduction in place, but that’s not going to be enough for most homeowners to itemize. Without the state and local tax deductions, many would still find themselves choosing the standard deduction—and paying higher taxes as a result. Read more about NAR’s position here, visit this site to determine how this impacts you and if you have not done so already, please participate in NAR’s Call to Action on this important issue.