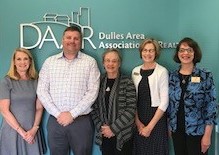 Earlier this year, Brenda MacEoin, ERA Teachers, was announced as the first recipient of the Jeanette Newton Community Leadership Award (JNCLA). The award, named after former DAAR CEO Jeanette Newton,  recognizes a REALTOR® who portrays a dedication to leadership, community and public service, humanitarianism and courage. Recipients  receive a $500 contribution, in their name, to a charity or organization of their choice.

MacEoin chose Loudoun Abused Women’s Shelter (LAWS) to receive the contribution in her name.  Founded in 1984, LAWS provides emergency shelter, counseling, advocacy, support groups, legal services and support to victims of domestic and sexual violence completely free of charge. Active in LAWS since 1998, Brenda has directed fundraising events, collected gift cards, helped transform the administrative offices and served on their Board of Directors for over a decade.

During the DAAR Board of Directors meeting in May, Holly Weatherwax, President of DAAR, introduced Shawn Mitchell, CEO and President of Modern Mechanical, as the sponsor of the JNCLA.  It was no surprise that Mitchell generously offered to sponsor the JNCLA award.  His company has not only been the center of the HVAC industry in Northern Virginia but has donated more than $45,000 to non-profit groups in the past five years.

Mitchell presented the contribution in MacEoin’s name to LAWS representative, Stephanie Houseknecht, and CEO Judy Hanley, PhD.  “No detail is too small, no task too difficult – with each venture her eye is always on the goal of making life safer, happier and more productive for our clients” said Houseknecht of MacEoin.