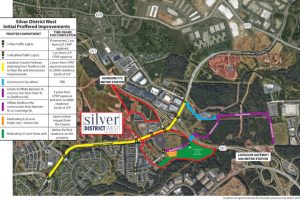 At the March 21, 2019, meeting, the Loudoun County Board of Supervisors approved the Silver District West development by a vote of 8 to 1, with Leesburg District Supervisor Kristen C. Umstattd voting no. The approved applications are for development of a 158-acre, transit-oriented, mixed-use community between Loudoun’s two new Metro stations that includes a broad range of transportation improvements, new public amenities, supports Metrorail, and provides new housing options for areas close to the Metro.

The Silver District West development is the third transit-oriented development in the area, following Loudoun Station and Moorefield Station, but the first development since the county implemented Metrorail Service Districts, which generates additional tax revenue that will support ongoing Metrorail service.

The plan is consistent with the county’s intended mixed-use employment, housing and transit concepts that are planned for communities located near Metro stations. The development will be a mixed-used community that is located south and west of the Dulles Greenway at Loudoun County Parkway and includes:

The land use proposal was reviewed through an extensive public process, which included more than a dozen public meetings by the Planning Commission and Board of Supervisors. The lengthy public process yielded a development proposal for the Board’s consideration that provides a number of benefits to the community.

Transportation
The county conducted independent traffic and financial studies that demonstrated the proposed applications would result in improved traffic flow in the region and a positive fiscal benefit to the county. Given the significance of the development, the county’s review process included conducting a Traffic Impact Study that showed the proposed road improvements would result in better traffic conditions in the area than if no development occurred and the road network remained unchanged. The development, as approved, will include a number of transportation and road network improvements including the widening of a segment of Loudoun County Parkway to six lanes, the construction of Shellhorn Road and Barrister Street, and improvements to five intersections in the area. The applications have the potential to accelerate road improvements that were previously identified by the county as necessary and provide the improvements sooner than the county’s anticipated schedule as well as achieve the county’s ongoing desire to provide the community with alternatives to the Dulles Greenway.

Financial
The county also conducted an in-depth Fiscal Impact Analysis that demonstrated the proposed applications would result a positive fiscal benefit to the county. While any development of this type results in new public responsibilities, the analysis shows an overall positive fiscal impact because the county will not have to pay for the road improvements. This is possible because the applicant has offered to build and pay for the road improvements and specify the number and type of residences. The road improvements to be paid for by the applicant are expected to save the county more than $60 million.

The financial analysis also showed the development would generate more tax revenue than other by-right development options that do not require approval by the Board of Supervisors. The county anticipates receiving an estimated $48 million in additional revenue from the Metrorail Service Tax that will be paid by property owners in the Metrorail Service Tax District over a 25-year period. The actual amount would depend on the project’s final build-out scenario.

Housing
The development as approved will include a mix of townhouses, condos and apartments. Smaller housing sizes, together with increased density, are desired near Metro stations to promote housing choice and affordability, encourage a diverse population, and to mitigate fiscal impacts to the county. Also, housing units located within a half-mile of the future Ashburn Metro Station are assumed to have higher real property values.

In addition, the developer has committed to contribute nearly $1,900 for every market-rate, residential dwelling unit constructed toward the county’s “unmet housing needs.” Unmet housing needs are defined as the lack of housing options for households that are unable to rent or purchase due to insufficient incomes to meet current market prices. The county will use the funds for affordable dwelling units.

Capital Facilities
The developer also has committed to provide land for two public facilities: approximately 8 acres for an elementary school and approximately 23 acres for a linear park along Broad Run. Proposed public spaces, recreational uses, and open space, particularly along the Broad Run, are interconnected within the development and extend to the Ashburn Metro Station.

The staff report that details the applications approved by the Board is published on the county’s website at www.loudoun.gov/bosdocuments in the Board’s March 21, 2019 business meeting packet.