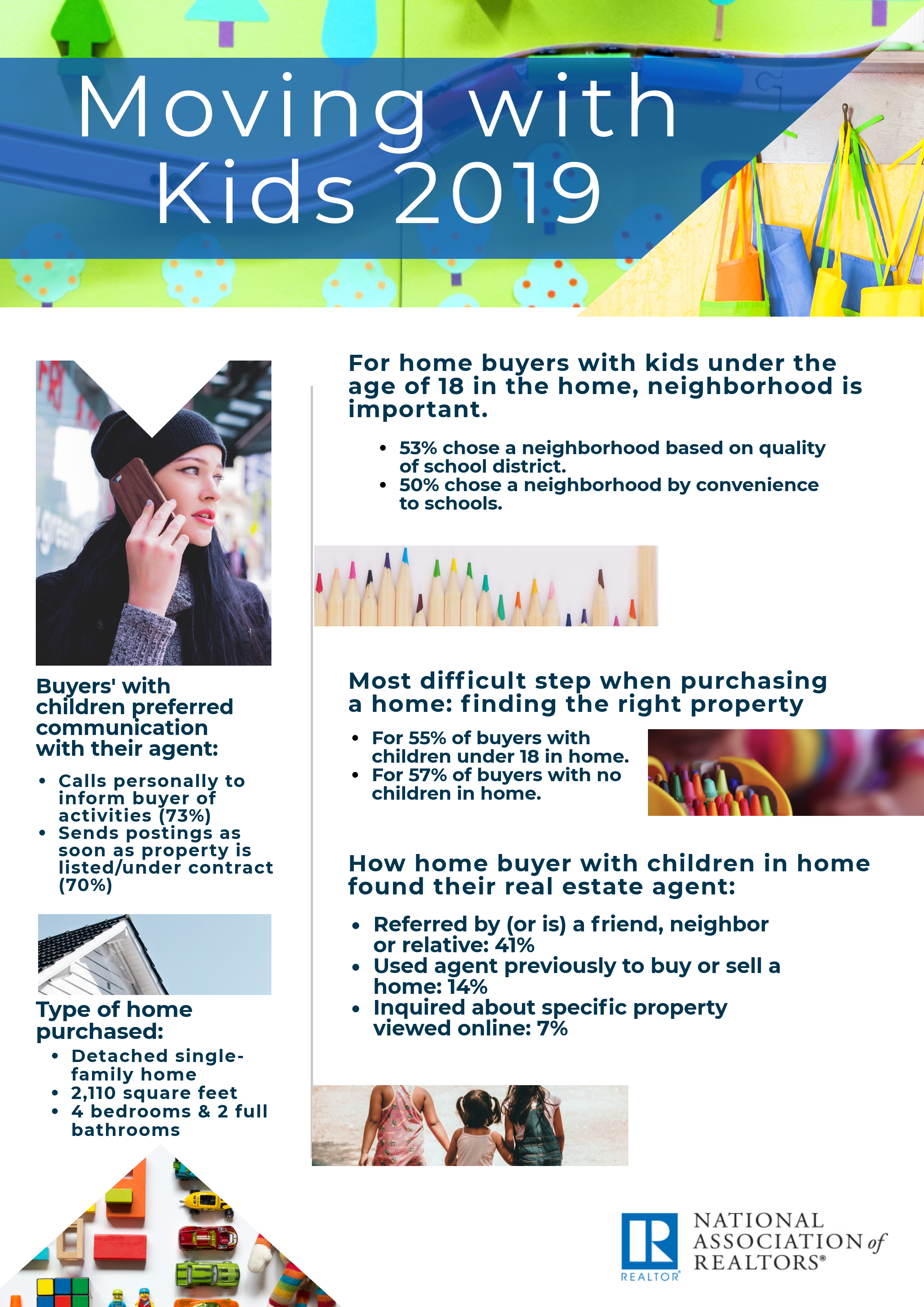 The act of moving into a new home or selling a home can be a hectic period for both home buyers and sellers. So it is not surprising to learn that changing residences with children in tow adds another level of chaos to the process.

That is according to a new report from the National Association of Realtors®, 2019 Moving With Kids, which explores the various home buying habits and seller preferences of those who have children under the age of 18 years old2 living in the home.

Of those polled who had no children, only 10% chose a neighborhood because of the quality of its school district. Merely 6% of those buyers with no kids said “convenience to schools” factored into their choice when they selected their home and neighborhood.

“Parents inherently make sacrifices for their children and family, and that is no different when shopping for a home,” said Lawrence Yun, NAR’s chief economist. “Of course, affordability is a part of the decision, but we have seen buyers with kids willing to spend a little more in order to land a home in a better school zone or district.”

In terms of making the final selection on exactly which home to purchase, buyers with children and those without shared some common ground. More than half of all buyers, regardless of children, said that finding the right property was the most difficult stage in the process. During that phase, among the home buyers with children living in the household, 86% purchased their home with the help of a real estate agent. Similarly, 87% of home buyers without children enlisted the services of a real estate agent when making their home purchase.

While both buyers with children and those without utilized an agent, NAR found that the preferences regarding agent interaction were different. For example, of those buyers without children who were shopping for a home – 74% said they wanted their agent to phone directly when relaying information about new real estate activity. However, 67% of buyers with children preferred that their agent make contact about properties via text message.

“The report’s findings showed that both buyers and sellers, especially those with kids, are often dealing with a time crunch of some sort, trying to house hunt while simultaneously raising a family,” said NAR President John Smaby, a second-generation Realtor® from Edina, Minnesota and broker at Edina Realty. “Tech-savvy Realtors® recognize this predicament and are meeting clients’ needs by contacting them via smartphone and text message.”

Polling confirmed that buyers with children ultimately purchased larger sized homes and properties. As a whole, they opted to buy homes that measured at 2,110 square feet in size with four bedrooms and two full bathrooms. This is versus those without children in the household; on average, they bought 1,800 square feet in size with three bedrooms and two full bathrooms.

“When buying or selling a home, exercising patience is beneficial, but in some cases – such as facing an upcoming school year or the outgrowing of a home – sellers find themselves rushed and forced to accept a less than ideal offer,” said Yun.

Twenty-five percent of those sellers with children said they sold because their previous home was too small. Nineteen percent said a job relocation caused them to sell, and 13% said a change in their family situation spurred the sale. Only 7% of those without kids said they felt as if their home was too small.

Courtesy of the National Association of REALTORS