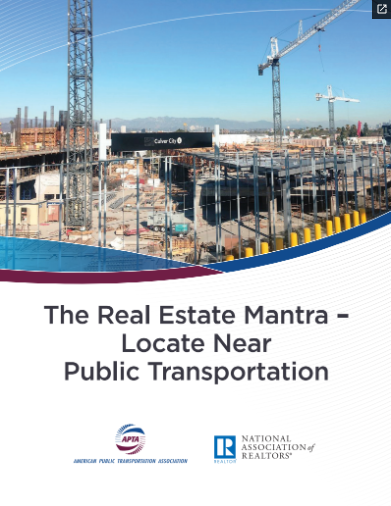 Neighborhoods located within a half mile of public transit services outperformed those farther from public transit based on a number of factors, according to a report recently released by the NATIONAL ASSOCIATION OF REALTORS® and the American Public Transportation Association.  The report is timely as our region prepares to welcome the opening of the Silver Line to Loudoun County.

The report shows commercial and residential real estate sales thrive when residents have mobility options. Residential properties within these areas had 4%–24% higher median sale prices between 2012 and 2016, the report found. Commercial values in four of the regions saw median sales prices per square foot increase between 5% and 42%. Transit-oriented areas also provide costs savings for residents: The report showed an average annual savings of $2,500 to $4,400 in transportation costs for the typical household. One in four households in close proximity to transit doesn’t own a vehicle, according to the study.

“The results of our report,” Oppler continued, “conducted over multiple years alongside the American Public Transportation Association, should reiterate to policymakers at all levels of government the importance of investing in modern, efficient infrastructure that facilitates growth and helps our nation keep pace in a rapidly evolving world.”

“Public transportation is a valuable investment in our communities, our businesses, and our country,” Skoutelas said, not just because transit options help residents get to work and school but also because public transportation makes areas more attractive for relocating companies.

But high demand and constrained supply has put upward pressure on price in neighborhoods with high-frequency public transportation. NAR has made it a priority to address affordability and supply issues, and Skoutelas said APTA is a partner in that effort. “As the conversation surrounding housing affordability continues,” Skoutelas said, “public transportation agencies are critical allies in working with elected officials and community leaders in the effort to increase housing opportunities and maximize value around stations.”  Read the full study here.