PRO Act passes in U.S. House: What the Bill Means for REALTORS® 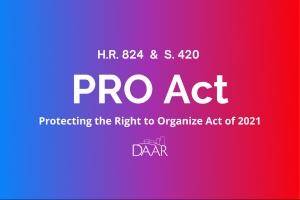 The real estate community has been buzzing with uncertainty since the PRO Act suddenly passed the House on March 9th, as many are unsure of how it will impact REALTORS®. If passed by the Senate and given presidential approval, the bill would establish new federal rules to make the process of unionizing easier for workers. Essentially, it attempts to revise the definitions of “employer,” “employee,” and “supervisor” which, in turn, would expand the number of individuals who could be covered by the fair labor standards.

Concerns among the REALTOR® community are focused on the possibility for changes to be made to the ways in which REALTORS® can conduct business as independent contractors. While there are numerous discussions online that position the bill as “certain to pass” in the Senate, the reality is that the bill (as it is currently written) will not likely garner enough support to pass through the upper chamber. In fact, NAR released a statement urging REALTORS® not to panic over its passage in the House.

Also in NAR’s statement was an update on their advocacy team’s efforts to address the PRO Act. It was mentioned that the team had worked with House lawmakers to ensure that REALTORS® would not be unfavorably affected. Furthermore, NAR stated that they were working to support an amendment that would protect the current definitions of ‘employer’ and ‘employee’. The organization is also pushing to ensure that such language is included in the Senate’s version of the legislation.

According to VAR, there has not been a substantial push to change independent contractor status in the state of Virginia.