NAR deems the outcome a victory for the future defense of property rights. It may also  have broader implications for similar government measures. 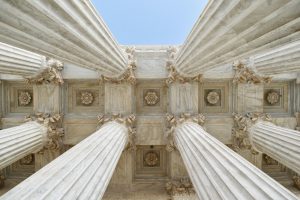 On June 23, 2021, SCOTUS ruled that a California regulation allowing union organizers to enter farmland for the purpose of uniting workers was unconstitutional by a 6-3 vote. The case, brought by two private farm businesses, challenged the regulation on the claim that it was a violation of the Fifth Amendment, which prohibits the taking of private property by the government without just compensation to the property owners (see: eminent domain).

The following information on the Court’s ruling is from the National Association of REALTORS®’ latest press release.

A strawberry grower and a fruit distributer in California filed a lawsuit challenging a state regulation that permitted union organizers to enter the grounds of agricultural businesses for up to three hours per day for 120 days per year. The plaintiffs in the case claimed that such access constituted an “easement” without consent or compensation which would be in violation of the Fifth Amendment. The Takings Clause of the Fifth Amendment, applicable to the States through the Fourteenth Amendment, provides: “[N]or shall pri­vate property be taken for public use, without just compensation.”

The Supreme Court held that the government appropriation of a right of access to private property – to literally “take access” – is a per se physical taking.

The Court held that the California access regulation was a taking without proper compensation on the grounds that it gave union organizers a right to physically enter/occupy the growers’ land. This takes away the owners’ right to exclude others from the property.

Notably, the Court also reasoned that even though the access was not permanent or constant, the regulation was still a per se physical taking because without such permissible access, the union organizers could have been excluded from the property. SCOTUS precedent has held that the duration of the access (similar to the size of the access) bears only on the amount of compensation due and that intermittent access, as opposed to continuous access, does not make it any less a physical taking.

The Court clarified that the CA access regulation appropriates a right to invade the growers’ property, takes away their right to exclude, and thus is a per se physical taking, rather than simply “regulating access.” A comparison was made to government requirements of property owners ceding a right of access to health and safety inspectors. The Court held that in those instances, having access is a condition of receiving certain benefits (i.e. permits, registrations, and licenses) and does not constitute a taking because the access is germane to the benefit provided and for protection against public risk.

This case has been deemed a victory for the future defense of property rights and may have broader implications for similar government measures, such as the CDC’s eviction moratorium.

For more information directly from NAR on the SCOUTUS ruling, please click here.