The Dulles Area Association of REALTORS® recognized several REALTORS® who reached exceptional levels in the real estate industry in 2018. They were honored and celebrated at the DAAR REALTOR® Awards Reception on Thursday, March 8, 2019, at the 1757 Golf Club in Ashburn.  View the pictures from the event.

The awards include the annual REALTOR® of the Year, Jeanette Newton Community Leadership Award, and members in the Circle of Excellence. DAAR also announced recipients of the Rookie of the Year, Affiliate of the Year, and Production, Anniversary, and Special Recognition Awards.

Congratulations to DAAR REALTOR® of the Year – Holly Weatherwax! 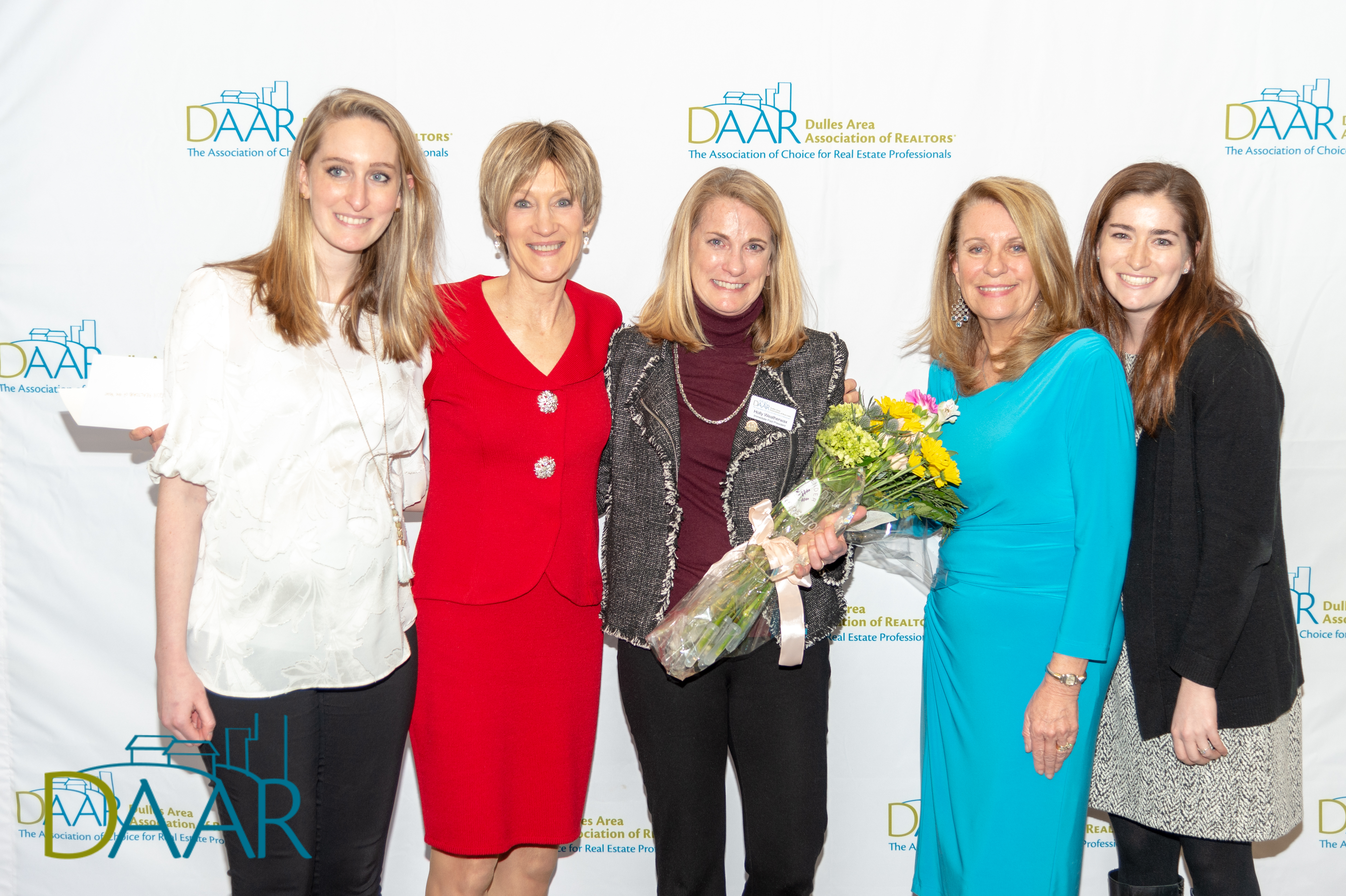 Photo: Krissy Jenkins, Laurie MacNaughton, Atlantic Coast Mortgage, Holly Weatherwax, 2019 DAAR President Phyllis Stakem, and Kaylie WeatherwaxThis prestigious honor is awarded to the REALTOR® who excels in serving the real estate profession and community. DAAR is proud to select Holly Weatherwax as the 2018 DAAR REALTOR® of the Year. Weatherwax epitomizes the REALTOR® Spirit through her leadership, commitment to professional development and educational excellence; advocacy at the local, state, and national level; and dedication to the industry and community involvement.

Weatherwax is a REALTOR® with Momentum Realty and served as the 2018 DAAR President. She has been a DAAR member for sixteen years. “It is an honor and a privilege to receive this award,” said Weatherwax. “When I was selected as President of DAAR, I vowed to ensure that the REALTORS® had a voice at the local, state, and national levels on issues that affect our business, homeownership, and property rights.” Weatherwax’s ability to communicate and advocate on behalf of DAAR with government officials, regional association partners, and industry vendors played a key role in advancing the real estate industry and ensuring that DAAR members are the premier REALTORS® for their clients.

“I have known Holly for many years,” said Phyllis Stakem, 2019 DAAR President. “She has always strived for the highest ethical standards and demonstrated that true success comes from excellent relationships with fellow agents, clients, and customers.” Weatherwax is a previous Circle of Excellence Award winner and has given countless hours of volunteer work on behalf of DAAR.

Jeanette Newton Community Leadership Award
The Jeanette Newton Community Leadership Award recognizes REALTORS® and Affiliates who have made an extraordinary commitment to improving the quality of life in their communities through their volunteer work. The recipient portrays a dedication to leadership, community and public service, humanitarianism and courage. A contribution to a charity or organization of the winner’s choice will be made in the winner’s name.

The recipient of this award is Gwen Pangle with Pangle and Associates. For almost twenty years, Pangle has voluntarily worked to advance public policies that build strong communities, protect property interests, and promote a vibrant business environment. Leesburg’s First Friday is just one example of the impact Pangle has had locally. “Gwen is strong volunteer leader whose impact can be felt locally, statewide, and even nationally,” said Stakem. “We are very fortunate to have her here at DAAR.”

The organization chosen by Pangle is Mobile Hope of Loudoun. $500 will be donated in her name.

The Jeanette Newton Community Leadership Award was established in honor of Jeanette Newton, who served as the Chief Executive Officer of DAAR from 1991-2016. Newton initiated several community service programs for the Association including the Habitat/RPAC Golf Tournament, Rebuilding Together/Christmas in April, Charity Auction and DAAR member participation in the Babe Ruth World Series. She served on various board and commissions including Loudoun Habitat for Humanity, Loudoun County Chamber of Commerce Board of Directors and the Loudoun Board of Equalization.

Special Recognition Award
A Special Recognition Award was given to Lars Henriksen, Century 21 Redwood Realty, for his tireless dedication to advocacy on behalf of the real estate industry and the future of Loudoun County. In 2016, Henriksen was appointed as the DAAR representative on the Envision Loudoun Stakeholders Committee and helped design a growth plan for that takes into consideration balanced growth and housing opportunities.

The Dulles Area Association of REALTORS® (DAAR) is The Association of Choice for Real Estate Professionals™ in the Northern Virginia area.  Founded in 1962, DAAR works to safe guard and advance the mutual interests of the public, property owners, and real estate professionals for real estate-related matters.