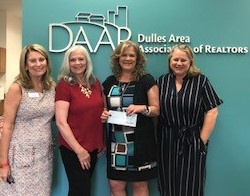 Earlier this year, Gwen Pangle, Pangle and Associates, was announced as the second recipient of the Jeanette Newton Community Leadership Award (JNCLA) during the 2019 DAAR Awards Ceremony. The award, named after former DAAR CEO Jeanette Newton,  recognizes a REALTOR® who portrays a dedication to leadership, community and public service, humanitarianism and courage. Recipients  receive a $500 contribution, in their name, to a charity or organization of their choice.  This year, Modern Mechanical sponsored the JNCLA award and donation.

Pangle chose Mobile Hope to receive the contribution in her name.  Mobile Hope improves the lives of young people, 24 years of age or younger, who are precariously housed or homeless in Loudoun County. They create pathways for this fragile, overlooked, and often unacknowledged population to have access to housing solutions, daily essentials and life-changing support.

During the DAAR Board of Directors meeting this week, Phyllis Stakem, President of DAAR, introduced Sharon Wright, a representative of Modern Mechanical and sponsor of the JNCLA award, who presented the contribution in Pangle’s name to Mobile Hope CEO, Donna Fortier. It was no surprise that Modern Mechanical generously offered to sponsor the JNCLA award.  The company has not only been the center of the HVAC industry in Northern Virginia but has donated more than $45,000 to non-profit groups in the past five years.

Earlier this year, Gwen Pangle, Pangle and Associates, was announced as the recipient of the 2018 recipient of the Jeanette Newton Community Leadership Award (JNCLA) which recognizes a REALTOR® who portrays a dedication to leadership, community and public service, humanitarianism and courage. For almost twenty years, Pangle has voluntarily worked to advance public policies that build strong communities, protect property interests, and promote a vibrant business environment.

In the spirit of the award, the recipient chooses a charity of choice and a donation is provided.  This year, Pangle selected Mobile Hope of Loudoun to receive a $500 contribution in her name from Sharon Wright, a representative of Shawn Mitchell, CEO and President of Modern Mechanical, as the sponsor of the JNCLA.  Phyllis Stakem, President of DAAR, introduce Sharon Wright and Wright presented the contribution in Pangle’s name to Mobile Hope CEO, Donna Fortier.